Sometime within the first few days of 2014, a friend posted on Facebook an idea going around for a Pay-It Forward scheme: people making by hand or in some fashion “arting” a gift to another mutual participant.  Loving the concept, I posted this as well, and had three takers…folks who wanted something created by moi and who would give me something in return.

Now, it’s been an interesting year.  I learned about the vicious Polar Vortex (could’ve kept that one to yourselves, Canadians), traveled overseas, and spent most of the year in some degree of pain which culminated in a hysterectomy in September.  But all this isn’t the reason why I found myself empty-handed for my three friends still at Thanksgiving time.  The real reason is that I’m the Princess of Procrastination, and deadlines rarely work on me.  Some contrary bit of my nature, no doubt.  But I do have a conscience, so endeavored to complete and/or start each project before year’s end.

I began with this little ensemble, for my friend DeeDee (blog: Gregarious House.)  I had the idea that she liked old-fashioned flowers and had a feminine, classy aesthetic. So out come these lovely hydrangea fabrics from Lakehouse Direct which I’ve had forever; I added a couple miscellaneous fabrics into the mix as well.

I decided to turn them into a shopping tote, based on my favorite pattern from Alicia Paulson.  I’ve made several of these for myself and friends and family, and love its practicality…compacts easily, looks pretty, and holds a deceptive amount of loot. 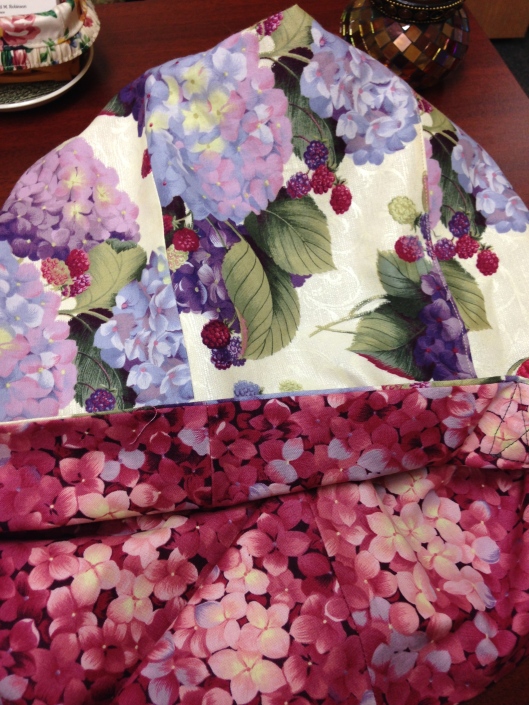 But a tote alone seemed sort of chintzy (and not the nice, floral kind.) How about something crocheted?  I’m still very much a beginner and entirely self-taught, but I found a pattern for a spa washcloth that was more than just a plain single crochet stitch, and which I thought I could manage.  I’ll definitely use it again. Thank you, Ravelry!

Now, what’s a spa cloth without a lovely, handmade, nicely-scented soap to lather into it??  Soapmaking not being in my skill set, I called upon a favorite soap lady at Daybreak Lavender Farm.  Their products are just luscious, and I felt like a dreamy, lavender soap rounded out the gift well. 🙂 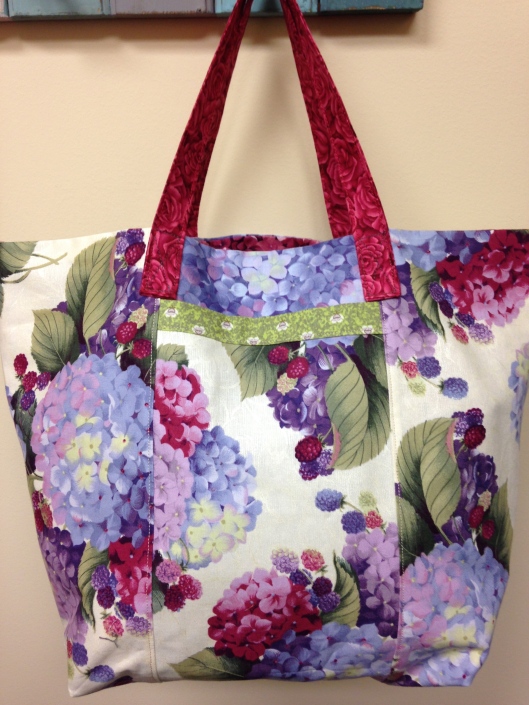 4 thoughts on “Soap in a Tote”